We made a late start after breakfast to allow the heavy rain showers in Les Herbiers to subside. After a few minor diversions caused by timing delays in the GPS app, we found the road North. It was a long but steady climb and we knew it would take us to the highest point of the ride towards Saint-Malo. At the top, there were ancient windmills to the left of us and an ancient church, with the obligatory stained-glass windows, to the right. 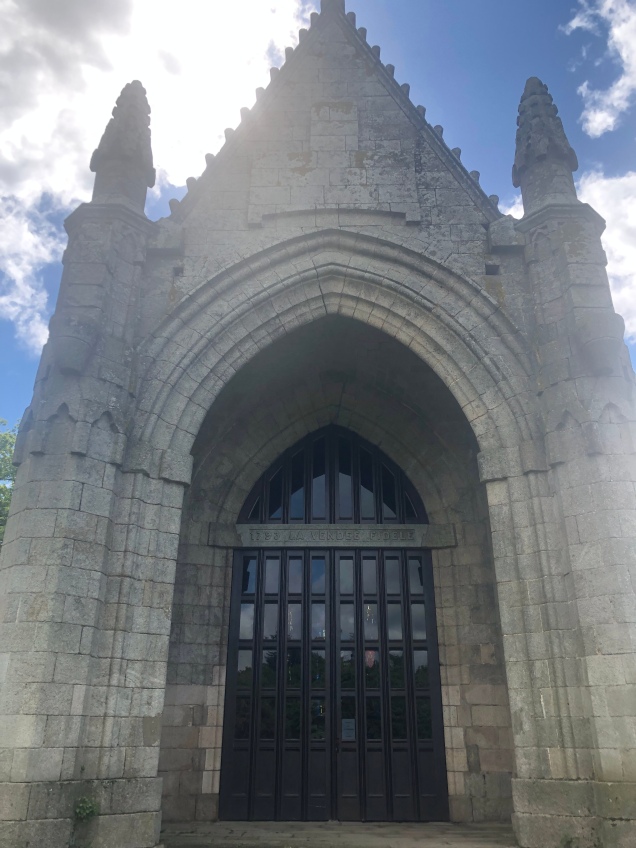 In an adjacent field the cattle were unimpressed and simply surveyed the surrounding countryside. 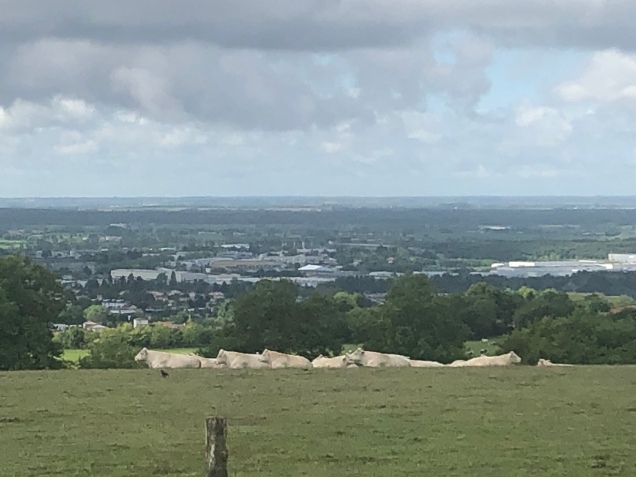 The northbound D160 felt reasonably safe but there was a fair amount of traffic so we once again decided that a detour onto smaller roads would be worthwhile. We stopped at the first village, sat on a bench and ate a couple of ham and cheese rolls that Andy had snaffled from the breakfast buffet. An almond croissant from the village boulangerie completed the meal.

The sun was breaking through frequently and we were lulled into a false sense of security that we wouldn’t see any rain before our next destination, the town of Ancenis on the mighty river Loire. The only problem was that a niggling pain in my left knee, which I first noticed on the way into Les Herbiers, had become a lot worse. It was really uncomfortable, limiting our speed, and we made a further stop so that Andy could dispense his supply of ibuprofen.

The pain dulled and we ploughed slowly onwards, incurring another delay when Andy noticed my rather deflated back tyre. It’s a tubeless tyre, like those on a car, and contains a fluid which seals small punctures on contact with air, although not without some loss of air as it does its job. We pumped it up, repeated the process a few miles along the road, and it appeared to be fully repaired, unlike my knee. (There was a puncture in my front tyre on day one of our trip too. That sealed well but only after spraying little dots of sealant over the front of my jacket!)

About 12 miles South of Ancenis, we stopped at a bar for a medicinal beer and logged onto Booking.com to search for accommodation. We were immediately struck by a smart, spacious Ancenis apartment in a good location near the Loire so we booked it. A rain shower passed over during our last hour of cycling but so quickly that we’d dried out by the time we reached the bridge over the Loire.

The apartment was one of two in a converted old building and the conversion was done with some great style. Andy was keen to cook again and there was a well-equipped kitchen.

After a short shopping trip, French-trimmed lamb cutlets with peppers and salad re-fuelled us. We ended these evening with a stroll to a nearby bar with the most fabulous selection of wines.

One thought on “Les Herbiers to Ancenis”